Originally conceived back in 2009, musical tandem Tensei navigates from Chicago to a sweet spot somewhere near hip-hop, jazz, funk, soul, and electronic music. The last ten-ish years they’ve worked together with the likes of Black Thought, ADaD, Denmark Vessey, Tall Black Guy. Besides that, they’ve enlisted a range of respected jazz and soul artists from their home turf such as Makaya McCraven, Kafele, and Greg Spero.

What do you do for a living? To you personally, is it in any way relevant for your work as a music producer?

Kramer: Currently, I work in the robotics field and travel the world.  Experiencing many cultures and places has definitely had an impact on my creative inspiration. Traveling from place to place gives me ample free time to be creative and network with people that have similar music tastes.

Wells: Right now I’m in school pursuing a Master’s degree in Anthropology. I feel like the study of anthropology definitely encourages experimentation, thinking outside the box and not being afraid to experience and embrace the new and unfamiliar in regard to culture. It has definitely influenced my musical aesthetic beyond just what’s happening in the USA.

What are your earliest memories of hearing or listening to music?

Kramer: My parents listened to records as long as I can remember, mostly classic rock such as Pink Floyd or Grateful Dead and 80s pop like Michael Jackson, Prince, & Elton John. In my younger years I hated it, and we used to have fights when I played NWA or Beastie Boys ultra-loud in my room. I first got introduced to jazz, soul, and funk through 90s classic hip-hop like Tribe, Nas, Wu-Tang, and Dre. These late 60s / early 70s sounds ended up becoming a staple of my daily music intake as a young adult.

Wells: Honestly, my story is very atypical. My parents were a bit older when I was born and they didn’t have a lot of records and stuff like that around the house. Mostly radio stuff, Motown–things like that. My real music education came through church and through my older cousins who were into all the funk, soul, rock and early hip-hop music. I used to spend a lot of time in the basement of their house listening to records while they were out running the streets. The turntable was kinda like my babysitter. In my teenage years is when I started really digging, at first just basic jazz stuff (Blue Note, C.T.I, etc) and with time I getting into all of the musical genres that I love today.

“Done By the Forces of Nature by Jungle Brothers opened up my mind to what could be done sonically in hip-hop. It’s a classic (…) and didn’t get the shine it deserved!’ – Midas Wells

Any ‘obscure’ or lesser-known music that has influenced you along the way?

Kramer: Jeez, there are so many records to list up… These days, the “internet underground” is relative as there have been so many niche movements over the past years. Right now I’ve really been feeling that new Low Leaf release, Primitiva.  To go back over time, I’d say 1967’s Rotary Connection is one of the pieces of super-super classic music that seems to have been forgotten to me.

Wells: Too many different artists and musical genres to list. But if I had to name one hip-hop album that I feel was criminally overlooked and that personally influenced my production sensibilities, it would be the Jungle Brothers’ second album, Done By the Forces of Nature. That album opened up my mind to what could be done sonically in hip-hop. It’s a classic that was just sonically ahead of its time and didn’t get the shine it deserved!

Which instruments do you play now? Are you guys self-taught musicians?

Kramer: I never had a formal lesson, play keyboards and bang on pads. Over the years, talented musician friends have inspired me to learn as much as I can on my own. Still to this day I’m 90% vibe, 10% technical..

Wells: I had a bass guitar before I had a sampler (unless you count the Casio SK-1). I think I took lessons for about a month and then just started learning on my own. I picked up guitar and keys along the way, learning by playing along to songs that I liked. Trying to figure out the notes and chords they were playing. I wish that I would have been more “classically” trained in my early years but I think that learning the way that I did helped me with regard to composing music, it developed my ear as opposed to just my chops.

“Personally, I got to the point where I would wish there were extra notes in the sample when I was making tracks that just were not there. That’s when I decided to just make my own.” – Chris Kramer

How does that relate to Tensei’s mission of making music without, as you call it, “reliance on samples”?

Kramer:  That statement is in the context of sampling other people’s music. I don’t think there is anything wrong with sampling records. We both started out that way. Personally, I got to the point where I would wish there were extra notes in the sample when I was making tracks that just were not there. That’s when I decided to just make my own.

Wells: I love sampling and still chop and make sample-based beats in my spare time, it’s cathartic! Back when I was doing mostly sample-based production I eventually advanced to a point where I was chopping samples down to individual notes, scaling them on the MPC pads and playing what I wanted to hear. I started thinking, why am I sampling an electric piano or guitar note and playing it on the pads when I could just play out exactly what I wanted to hear on a Rhodes or a guitar…?

Kramer: Well, we use samples all the time. In fact, all the music is sample based as we loop up parts and don’t record live… However, we sample ourselves and friends who play other instruments. But yes, the vast majority of the material we write and compose ourselves.

Wells: I gradually started incorporating more instrumentation within my sample-based productions. This was a couple years before Kramer and I linked up to form Tensei, when I found out that he had a similar trajectory we decided to make the Tensei projects “mostly” sample-free as far as things that would have to be cleared. It was a creative as well as economic decision.

What can we expect of your upcoming releases on Tokyo Dawn Records?

Kramer: The upcoming TDR releases feature a nice variety of guests from all over the place–emcees as well as singers. I think you can expect a nice positive vibe and eclectic music rooted in hip-hop-centric mixing, and drum stylings with a blend of jazz, funk and soul elements.

Wells: With a few nice musical surprises thrown in to illustrate our individual and collective growth as artists. Expect a little bit of everything focused through a hip-hop lens.

Is there anything you strive for with the music of Tensei, in terms of a “bigger picture”?

Kramer: Just to make music that feels good, not worrying about what is trendy.

Wells: To make good music that makes us smile when we hear it. And hopefully music which evokes some sort of emotional response from other listeners. Whether that be hope, fear, anger, gratitude, sadness, confusion, peace, or love.

What was the most important thing your parents taught you, that you now bring into your work?

Kramer: Work Ethic. My parents and grandparents both work very diligently and that rubbed off on me big time.

Wells: Ditto. I think it’s just that Chicago, blue-collar, working-class culture that trickled down into the art. Also, another important lesson was about not being afraid to defy convention. 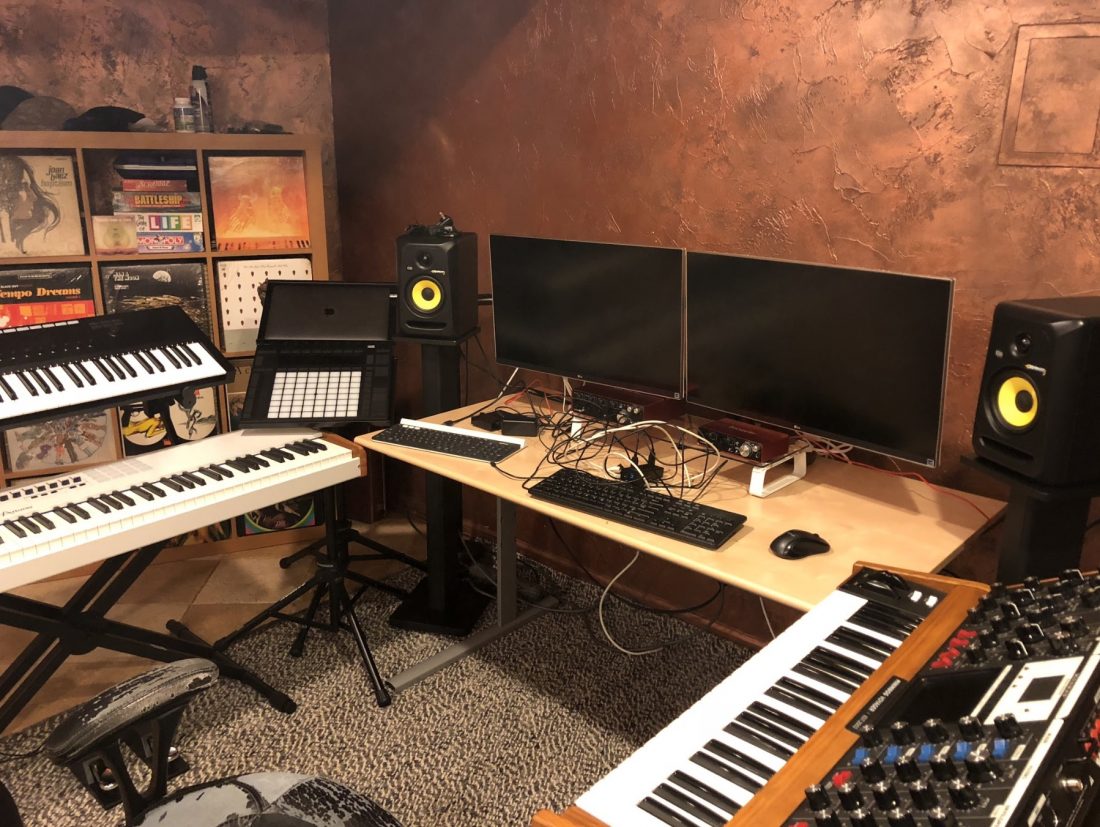 Lastly, always fun for fellow producers and musicians reading this interview: how does your studio look like?

Kramer (photo above): My space is set up to be as flexible as possible, so that I can play and make new music, mix, and also record folks without having to do much setting up. Lately, I have had the pleasure to collaborate with several vocal artists so I set up a nice space to chill and write in the same space.

Wells (photos below): In my new location I have a bit more space than we had in the Hotbox studio days. I’m usually in there by myself creating. So most of the space is taken up with gear like samplers, keyboards, laptops, and guitars. Plus, of course, the obligatory book/record shelf. I also have a lot of percussion instruments and things laying around because you just never know what you might need while being creative… 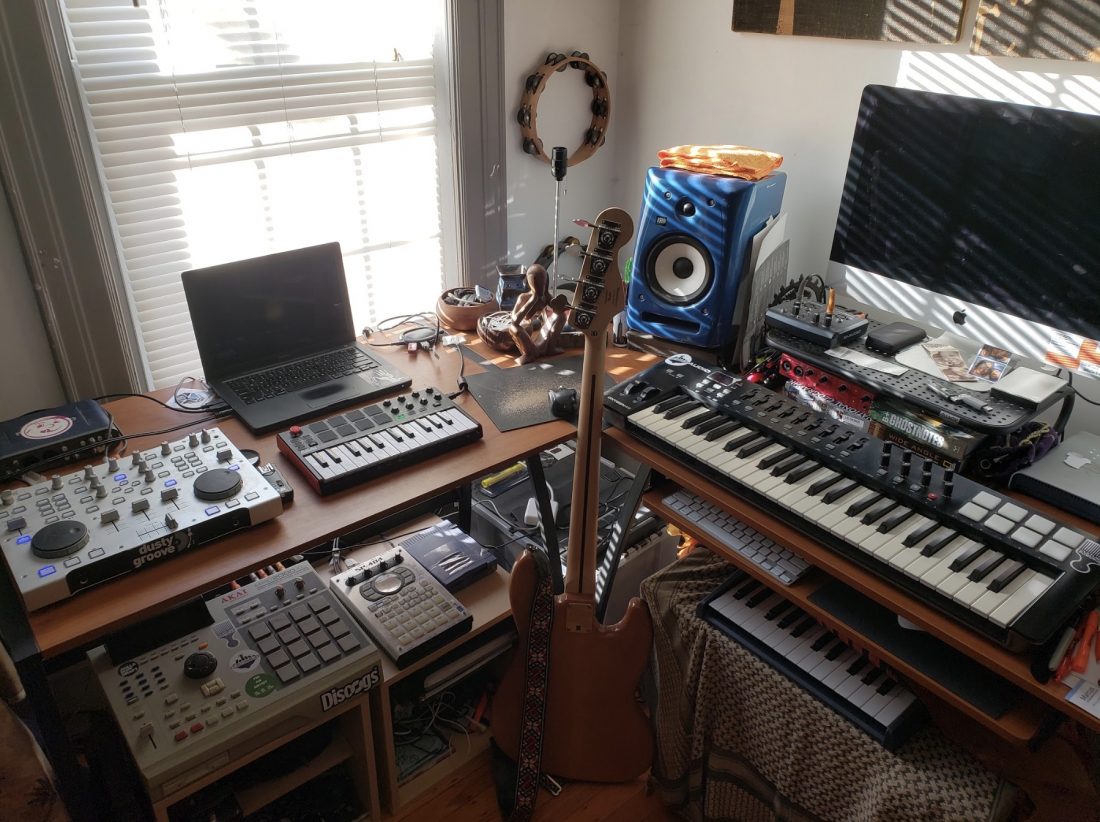 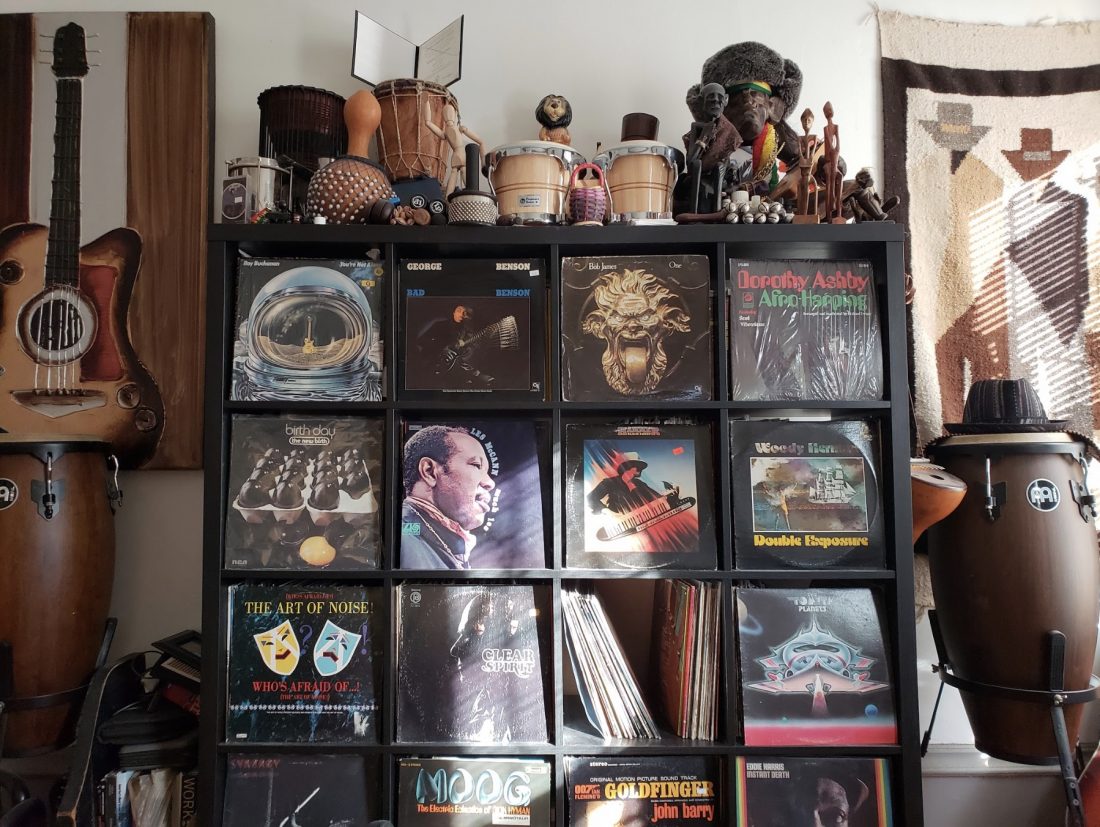 Want to hear what they’ve just talked about? If you missed it on top of this interview, listen to Tensei Music’s Retrospective guest mix here, covering almost a decade of making music:

‘BRWN’ by B. Cool-Aid (Ahwlee & Pink Siifu), with a Short Film by Mndsgn & Alima Lee